Although Eric Wilson was born in California, and grew up in Oregon, his most enduring memories revolve around the time he lived in Europe where his parents served as missionaries, smuggling Bibles behind the Iron Curtain. He found life to be an adventure with all the different exotic cultures and people he came into contact with.

During Junior high and High School, Eric found himself back in the states.  After graduation, he took time to travel in Eastern Europe and China, before returning to attend  Life Pacific College in California.

During his junior year of college, a childhood friend began attending, and within months they were married. Twenty years and two daughters later, Eric and his family live in Nashville, TN where he and his wife still enjoy going on dates.

From an early age, Eric knew he wanted to be a

writer. He is passionate about telling stories about real characters who struggle with life’s questions and are thrown into some very suspenseful situations.  He also likes exploring earth’s ongoing tension between heaven and hell.

I recently had the opportunity to ask Eric a few questions.

Kristen:   What is your favorite thing about writing books?

Kristen:   How about your least favorite thing about writing?

Eric:  I get tired of sitting for thousands of hours a year alone at my desk. It’s a marathon of the heart and mind.

Kristen:  Do you have an all time favorite character that you created?

Eric:  Oh, don’t ask me to choose from among my “children.” I love Sgt. Turney. And Gina Lazarescu. I want to do more stories with Cal Nichols someday. My favorite, though, would have to be Aramis Black.

Kristen:  I’ve noticed lately that quite a few really good Christian authors were either missionary kids, or were/are missionaries themselves. How do you think being a MK influenced you as a writer?

Eric:  Missionaries learn to adapt to other cultures and speak in ways that can be understood outside their own home. I think these are helpful for a novelist.

Kristen: In your new book, One Step Away, The Vreeland family is given material wealth as a test by Satan to see if they will abandon their faith in God. Most people consider financial success a blessing. Do you think they are misleading themselves?

Eric:  Wealthis a distinctly American trait of spiritual blessing. All around the world, Christians serve the Lord in poverty, famine, and hardship. They will receive their reward in heaven. In America, many Christians receive their rewards here on earth. I don’t think money or wealth are wrong to have and enjoy, but I do think we are wrong to measure spiritual success by it. Hugh Hefner is a pretty wealthy guy, last I heard.

Kristen: Just for fun, would you tell us something really crazy you have done, or something about yourself that would really surprise your readers?

Eric:  I used to live in the Himalayas, when I was a boy. I’ve seen the Taj Mahal, Petra, the Great Wall, and some of the other wonders of the world. And yet, I’ve never gone overseas with more than a few hundred dollars in my bank account. The walk of faith is exciting and often unnerving. Believe me, I’d love to be independently wealthy so I could focus my energy on other things. Maybe God knows I need a fire lit under me to motivate my writing. Maybe someday I’ll learn. Or maybe, just maybe, I’ll have to wait for a reward on the other side and serve and love Him with all my heart down here.

A Trial of Blessings

One Step Away by Eric Wilson

Bret and Sara Vreeland are an average low income family struggling to make ends meet.  Though they try and try they just can’t seem to get ahead of all the expenses that pile up.  But they have learned to be content and serve God, and are trying to teach their children the same thing. When Satan notices this family who seems to have so little, he comes before the Almighty with a petition.  “Let me test them“, he says, “Will they still be so eager to serve you if they have riches beoynd belief?”  After careful scrutiny, The One Who Sits Upon The Throne gives his permission–permission to begin a trial of blessing. How will Bret and Sara respond when everything in life starts going their way?  An unexpected inheritance, a major promotion, a dream of sucess come true–will all these things capture the devoton they once gave God?  When they’re faced with an unexpected choice of life altering proportions what choice will they make? The premise of this book pulled me in from the start, and did not disappoint.  Well written and engaging , One Step Away brings us real characters who come alive on the pages.  I found myself cheering and yelling at the characters as if they were close friends.  Although not preachy, this book has me considering how I view the blessings I have been given.

This book was provided to me by the publisher, Bay Forest (an imprint of Kingstone Media Group).   Opinions rendered are completely my own.

Note:  Check back Monday August 15, 2011 for an Author Spotlight of Eric Wilson– a bio and interview you’ll not want to miss. 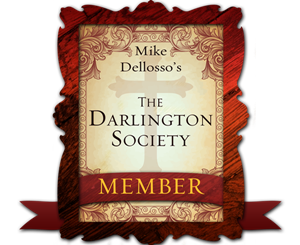